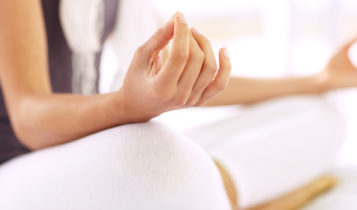 Most of the time exercising is the last thing we want to do when we’re on our periods. But according to a new study in the Journal of Alternative and Complementary Medicine, there’s one kind of yoga that may actually help you ease your period cramps.

Researchers recruited 150 women with abnormally painful periods and had half of them practice Yoga Nidra, which is a relaxation-oriented style of yoga. It’s performed with guided meditation, entirely in Savasana. Both groups took medication for their menstrual issues, but found that after six months, the group that was practicing yoga felt greater relief from painful cramps and heavy bleeding.

Researchers think it’s not just because yoga makes you feel like you’re doing something good for yourself (come on, we all know yogis who have that smug yoga attitude). But it’s because yoga helps you slow down your breathing, and allows your brain to produce delta waves, which are similar to deep sleep. That can help reduce the amount of intense luteinizing hormones in your system that can make for a heavy, painful flow.

Chinese secret to get relief from Heavy Periods

The Secret to Stopping Period Cramps